I have blown glass for over thirty years.  My education and indoctrination into the work of my life began at The Ontario College of Art, when there was still a glass studio there. It had fewer letters in the acronym of its name, circa 1984. 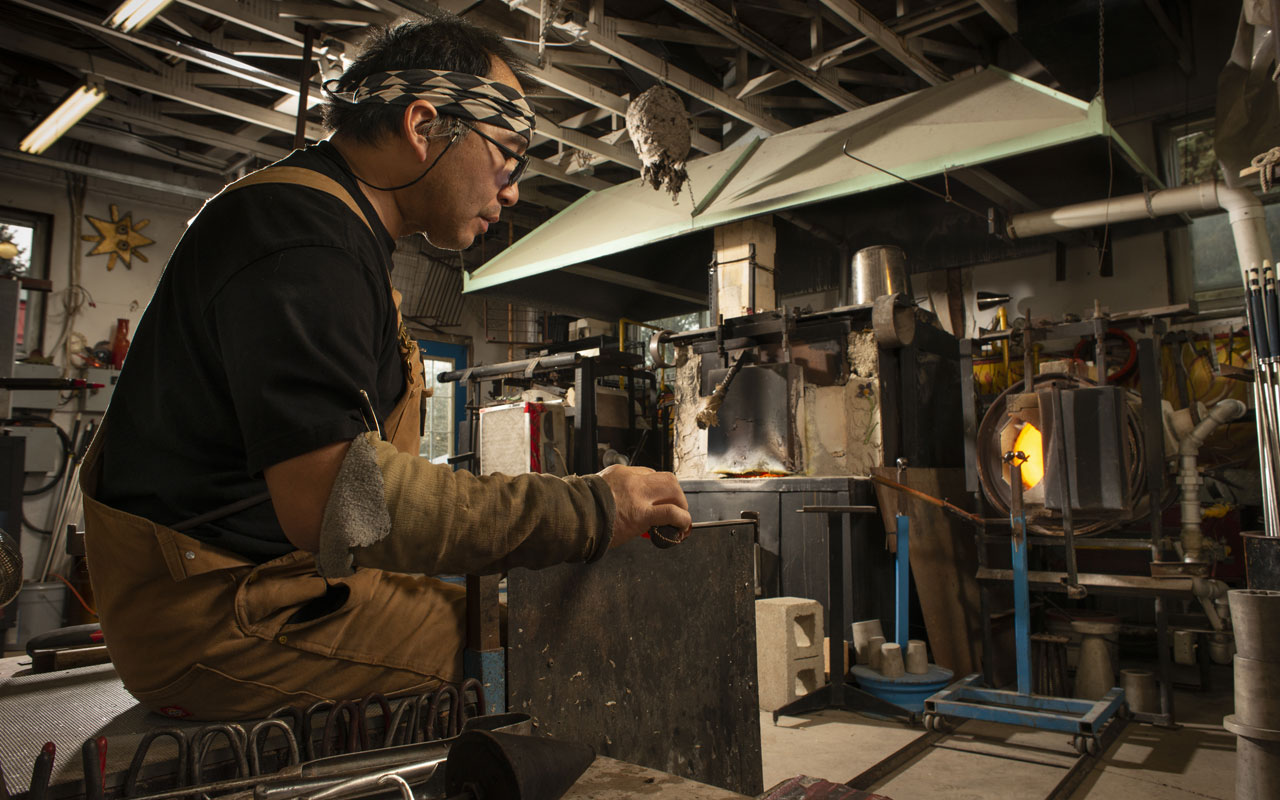 After graduating, I traveled to places where glass was important. One such place was Pilchuck Glass School, founded by Dale Chihuly, where I met and worked with renowned glass artists. Most influential were Lino Tagliapetra, and Benjamin Moore. It was there that I discovered Venetian style glass work.

I returned to Toronto and began a residency at the Harbourfront Glass Studio, in 1988. My residency lasted 3 years. It allowed me to practice and hone my skills as a glass blower. I ventured away from Toronto, buying and renovating an old farmhouse, two hours drive from the city, with my wife, Monica Johnston. She is a potter. I continued my professional creative practice, by initially sharing and renting studio space with friends. In 1998, I opened my very own glass blowing studio at Frantic Farms.

In 2000, I ventured across the border to expand our business. I began with a wholesale trade show in Philadelphia. The new millenia brought bustling growth. My little studio expanded to have 5 employees and my work was represented in over 200 shops and galleries. Somewhere out there in North America are thousands of voluptuous hearts, and legions of smiley kissy lipped animals.

As all good things come to an end. After 7 phenomenal years, the real estate and wall street bubble burst shrinking discretionary spending. Many mom and pop craft shops and galleries closed or they just retired. By 2009, seeing my foreign market dwindle, I returned to be a Canada only artist. I downsized to 1 half time employee and focused on our own showroom at Frantic Farms Gallery, in Warkworth ON. We had bought and built, in 2004, looking to diversify, at the height of the American craft market adventure.

Scaling down helped to advance and elevate my studio work. I made fewer small items and focused on larger, more expressive pieces. There was far less time in the office, administrating a big studio operation, and more time to contemplate in the studio, with each project. I had a chance to engage directly with my clientele instead of being represented by numerous different personalities, in places I had never really been to. I learned what it meant to be a local artisan.

I have a reverence for history, design, and the continuum of glass makers. I draw much inspiration from visits to the Corning Museum of Glass. However, I do not wish to make glass that is about glass. The objects I make are conceived with the influence of modern art, entertainment, contemporary fashion, vintage whimsy, and popular culture. The entourage of characters, and things which I rely on for the soul of my work are: Henri Matisse, David Hockney, David Gilhooley, Coco Channel, Audrey Hepburn, Ettore Sottsass, Braun kitchen appliances, Mr. Spock, and Darth Vader.

Become a friend or patron. Get irregular updates by receiving our email newsletter, 4 to 6 times per year.